Finding uses for Soldier Field seating beyond game day was one of the recommendations of the Museum Campus Task Force. (City of Chicago)

Chicago’s Museum Campus is often considered the jewel in the city’s crown.

There are, of course, individual gems on campus, said Jerry Adelmann, CEO of Openlands, but overall the site is fragmented, lacks a cohesive story, can be difficult to navigate, and in some of the most neglected areas. is not particularly attractive.

That’s why, in February, Mayor Lori Lightfoot convened a task force to analyze the campus’ flaws and strengths and come up with a vision for the future, a vision that would bolster the site’s reputation as a go-to destination for tourists and hub for residents. Now, five months later, the group has published its report, “Where the worlds connect.”

Although the report’s suggestion that the city should consider conducting a study on the feasibility of popping a dome atop Soldier Field got the most attention, the real headline, Adelmann said, should be how nature was centered in the plane.

There is, to begin with, no new structure included in the report due to advocacy by Adelmann and Juanita Irizarry, executive director of Friends of the Parks and member of the working group.

“We had to remind people a lot of the public trust doctrine,” Irizarry said, referring to a law that prohibits new construction east of DuSable Lake Shore Drive unless it’s for a public benefit. and not private.

“Certainly there were interests that would have created new structures. We reminded people of our willingness to continue,” Irizarry said.

Instead, the task force lent its support to the notion of the campus as an “urban nature retreat,” which was one of the five main themes contained in the report.

Key recommendations include restoring native ecosystems, creating a Great Lakes climate laboratory, “greening” or integrating nature into impervious surfaces, and finally realizing the original vision for the island of North. 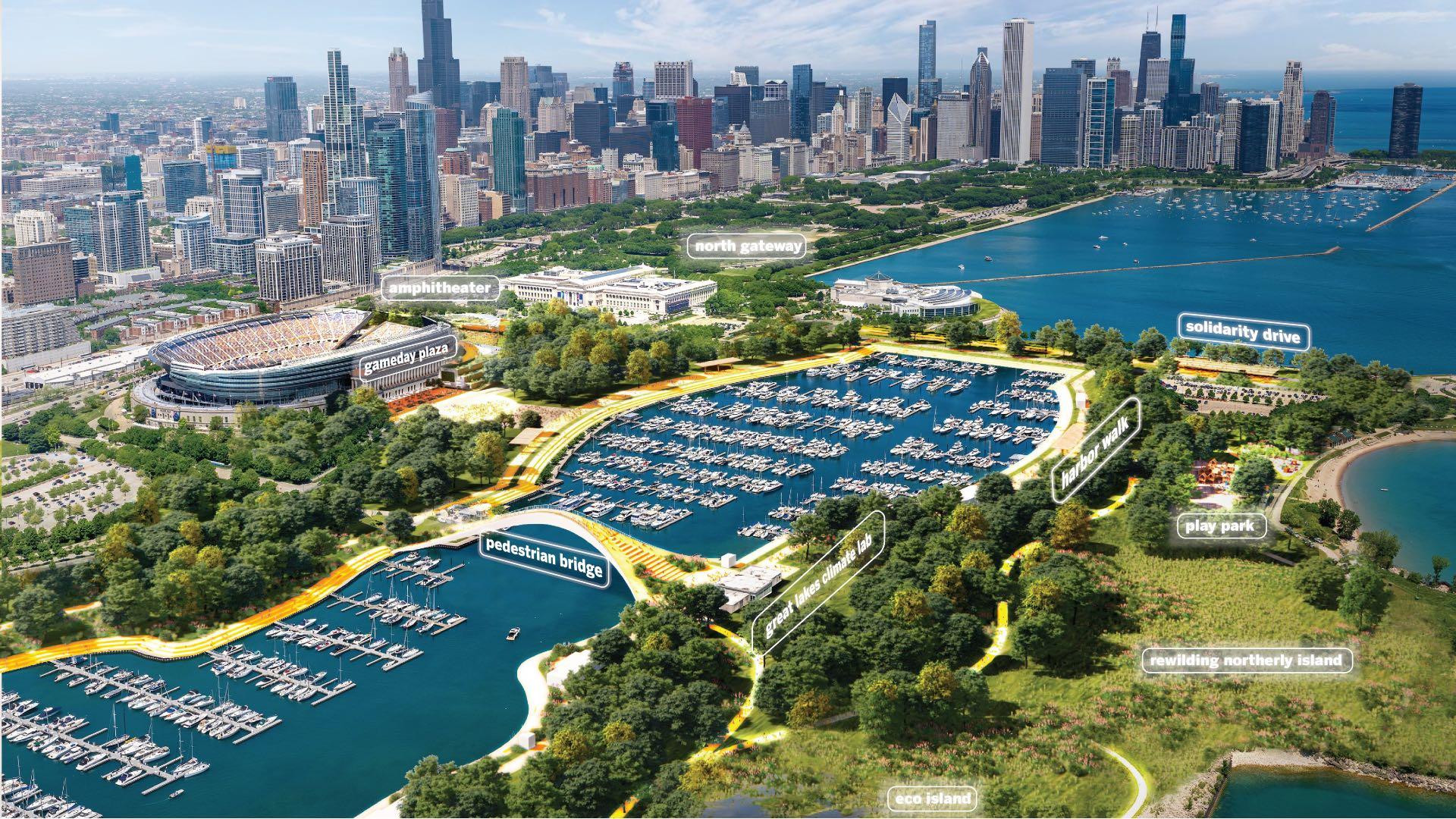 A proposed pedestrian bridge would improve access to the North Island. (City of Chicago)

Northerly Island is an artificial spit of land originally envisioned as a nature haven in Daniel Burnham’s 1909 “Chicago Plan”. But for 50 years the island was home to Meigs Field Airport, and although it became a park again in 2003, the island has struggled to fulfill its potential as a lakeside oasis.

The task force addressed accessibility issues by proposing a pedestrian bridge and also recommended moving the Huntington Pavilion, a “temporary” concert venue to the north end of the island. The report cites the need “to resolve contradictions in the use of Northerly Island as both a concert and nature destination”, with the pavilion obstructing visits to the more natural areas of the park.

To prevent continued erosion, which has significantly damaged the eastern edge of the island, the task force also recommended following through on a 2011 solution developed by Studio Gang: building barrier reef islands in the lake. Michigan. The reef would reduce the force of destructive waves, while having the added benefit of creating a lagoon for kayaking and snorkeling.

The task force even considered a way to capitalize on Northerly Island’s past life as an airfield. The old Meigs Field terminal could be adapted as a Great Lakes climate laboratory.

Imagine an environmental learning center, Adelmann said, where the public could attend programs, study plants and birds, stargaze at night and learn about sustainability experiments. It would also provide a space, he said, where Museum Campus institutions could come together to collaborate not only with each other, but also with other academic and advocacy organizations on conservation projects.

“It would reposition Chicago as a leader, globally, in the fight against climate change,” he said. 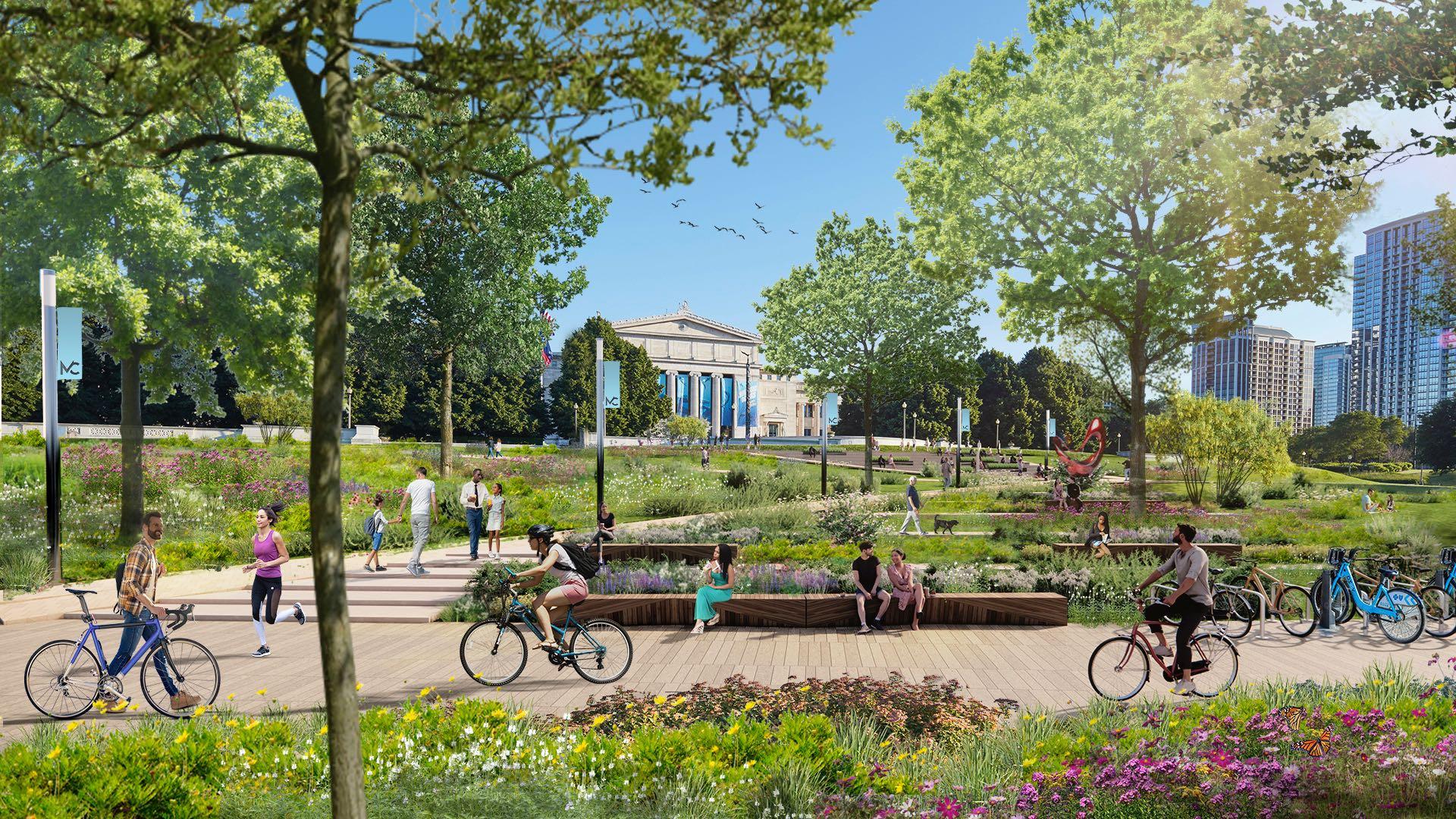 Native plantings would unify the museum campus, as shown in this vision of a proposed northern gateway. (City of Chicago)

The 300-acre area considered by the task force encompasses features ranging from the Field Museum to the McCormick Place Lakeside Center, from Burnham Harbor to the Adler Planetarium, and from the Shedd Aquarium to Soldier Field, each with its own distinct footprint.

The working group proposes to connect all of these disjointed sites through a unifying landscape of native vegetation, called “rewilding” by Adelmann for lack of a better word.

“Not to the exclusion of grass,” Adelmann said, adding that there will always be spaces for people to throw a Frisbee disc or sit down and enjoy a picnic. “But wherever appropriate, we will replace grass and concrete with native plants. This is an amazing opportunity to bring nature back to our city.

The Field Museum has already moved in this direction with the landscaping of its grounds, and the Shedd Aquarium is doing the same, Adelmann said. What “Where Worlds Connect” calls for is a more coordinated approach between campus institutions and the Chicago Park District.

While far from cheap, converting grass to natives could be a relatively simple, affordable, and high-impact improvement over some of the report’s larger-scale, longer-term infrastructure recommendations. did he declare. 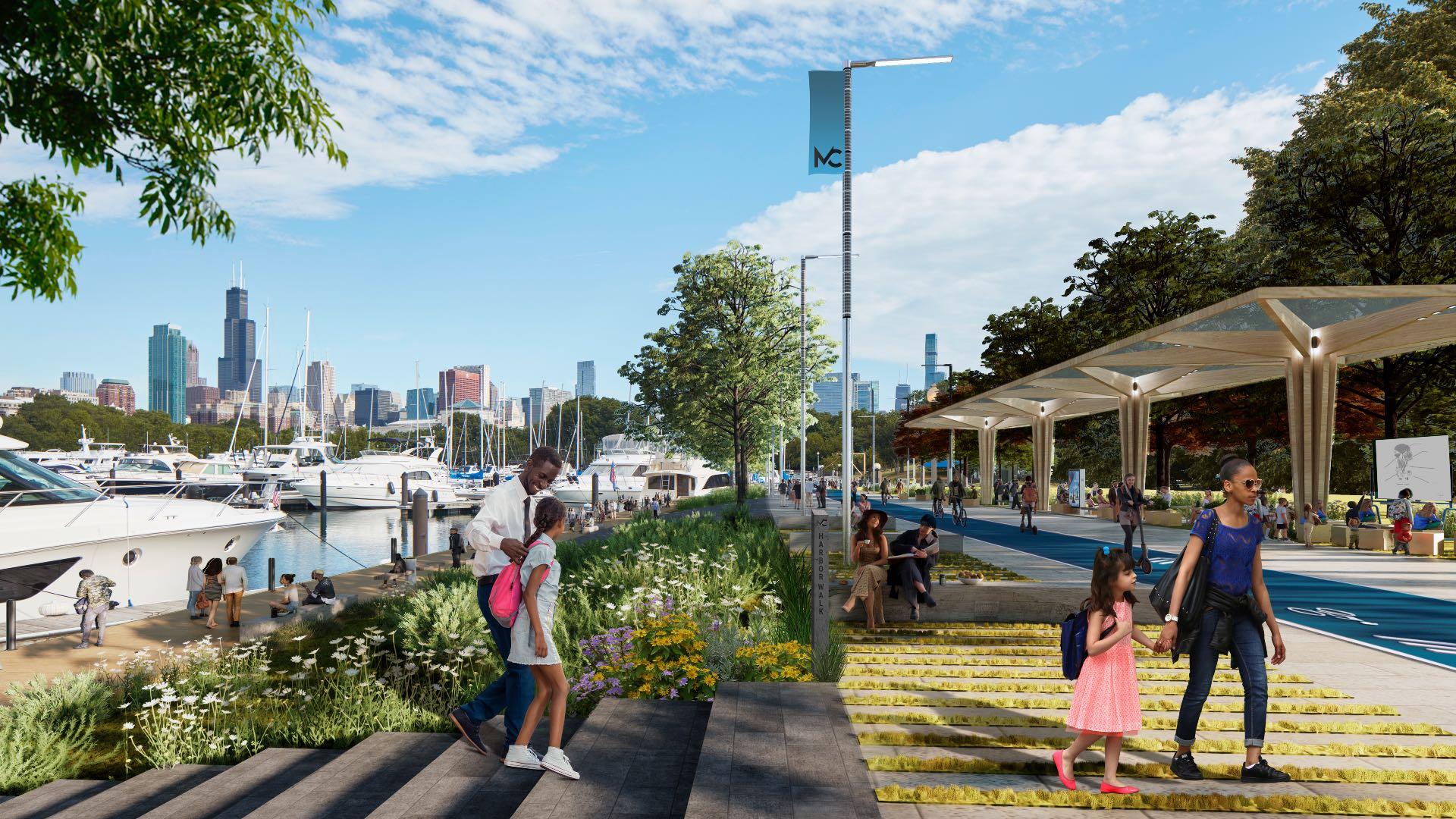 A rendering of a proposed footbridge at Burnham Harbor shows permeable pavement options. (City of Chicago)

The task force also tackled what is sure to be a contentious issue: parking.

For most people driving past campus in their cars on DuSable Lake Shore Drive, it’s easy to miss the surface parking portion of the site.

But Irizarry knows it’s there. All that sidewalk is a sticking point for Friends of the Parks, a reminder of a broken promise by Mayor Richard M. Daley that the Chicago Bears’ field would be moved west of the driveway as part of a reconfiguration of the campus in 1998.

Irizarry is particularly pleased that the “greening” of the Museum Campus car parks and the minimization of surface parking have been included among the objectives of the working group. 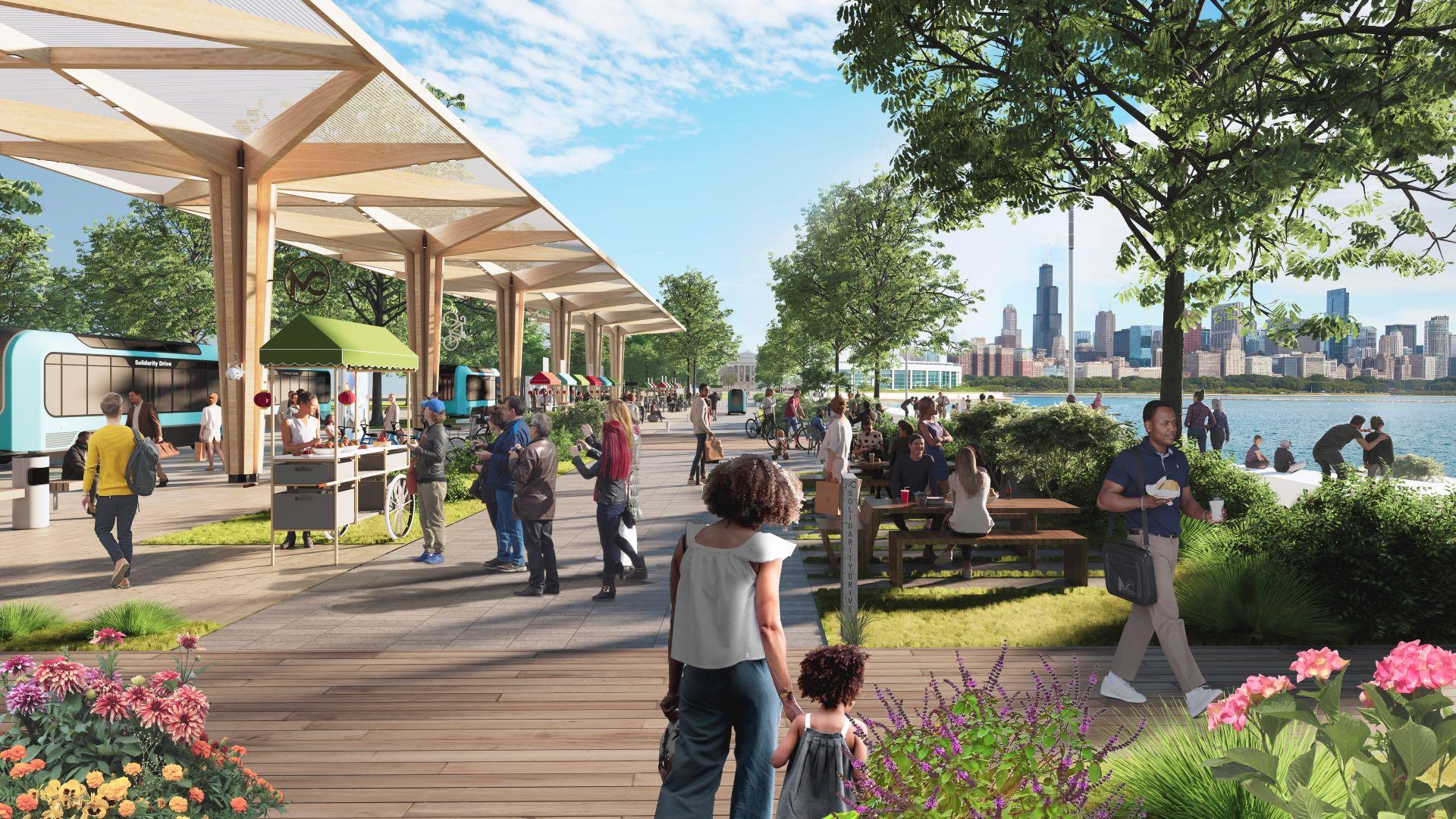 Solidarity Drive connects the Field Museum and the Adler Planetarium. It offers some of the most breathtaking views of the Chicago skyline, but is currently only used as a turn around. The Museum Campus task force is considering a much more attractive and pedestrian-friendly alternative. (City of Chicago)

As the report noted, half of the museum’s campus area is occupied by non-permeable surfaces – parking, roads, pathways and sidewalks. “This poses an ecological challenge by increasing the amount and rate of stormwater runoff, interrupting the natural flow of local water sources and soil absorption, and thereby increasing pollution,” the report said. “While on-campus parking capacity is fully utilized during major sporting events, daily usage is much lower for most of the year.”

Conversations about the need to rethink parking needs have already begun, according to Irizarry. Solutions could include creating remote lots and organizing free shuttles to campus, or better configuring parking needed for large events.

What’s left of the parking lot should be redone with more permeable options, a task force recommendation that “blackmails us,” Irizarry said.

As for that much-talked-about dome on Soldier Field, Irizarry said Friends of the Parks only approved the task force report because the wording of the document referred to a “study” of the dome. If she had recommended a dome outright, the organization would have balked, she said.

“Who’s going to pay for this?” she asked. If it’s public funds, it’s money the city should be spending to repair park facilities on the south and west sides, according to Irizarry. “Things in the plan that call for further study, we’ll be here to keep talking.” 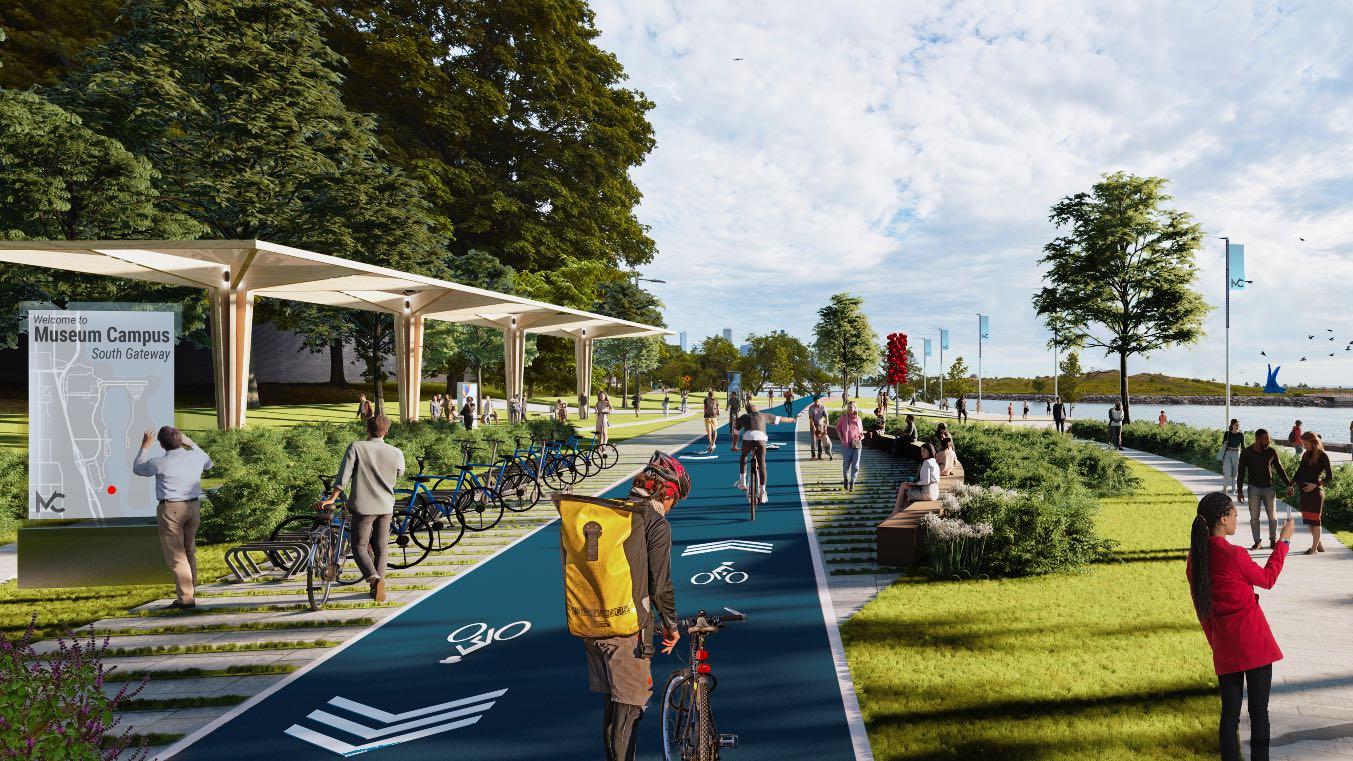 The museum campus lacks signage or other indicators of the site as a distinct destination. Both north and south walkways (shown) would create a greater sense of place. (City of Chicago)